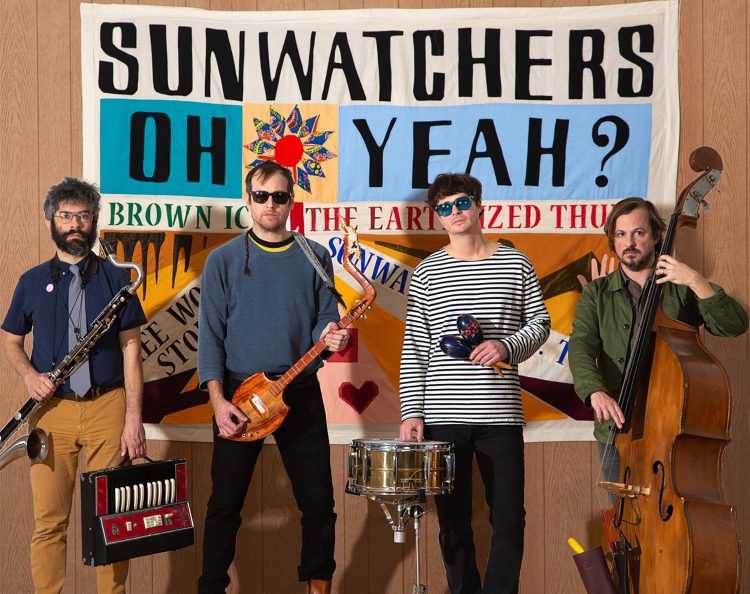 New York free-jazz outfit Sunwatchers are back with their fourth record Oh Yeah?, set to be unleashed onto the world via Trouble in Mind on 10th April.

Despite (perhaps) being the band’s most accessible & melodic work to date, New York quartet Sunwatchers‘ fourth album arrives in a flurry of notes with the buzzing hum of “Sunwatchers vs. Tooth Decay”; the title referencing a 1976 album featuring athlete and activist Muhammad Ali. A cheeky nod to be sure, but laced with the utmost reverence.

This attitude sums up Sunwatchers’ aesthetic in a nutshell; the acknowledgement (typically via the band’s irreverent song titles or album art) that the things in life we should take seriously are better faced and understood when disarmed by a wink or nudge. The band may cloak their fiery activism in a jester’s outfit, but it does nothing to dull the force of their attack.

“A work that’s both thrillingly out there and attractively melodic at the same time… Here and elsewhere, Sunwatchers come over like the snotty, whipsmart progeny of Zappa’s Hot Rats” – Shindig!, 4/5

“Three albums down and the New York-based instrumental quartet show no sign of running out of ideas or slowing down… They combine free jazz, spiky psychedelia, punk and noise rock [and] pull off this righteous fusion with aplomb… An infectious slice of sax-punk”  – Record Collector, 4/5