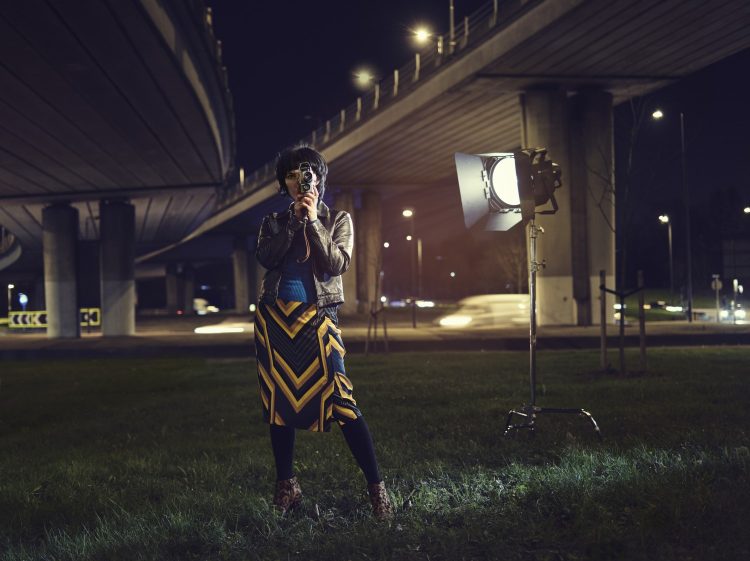 The Road: Lines of tarmac separating villages, towns and cities. The mission: to map stories from the in-between. Motorways, trunk routes, junctions and roundabouts, bridges and contours. Whose stories live on the road? Runaway lovers, fugitive fathers, romantic dreamers, those who are simply lost. Ballardian fetishists, secret adulterers, container drivers, sex workers, tired adventurers heading for home. And us.

Kate Jackson is back. The former frontwoman of the Long Blondes is pleased to announce her debut solo album, British Road Movies, due for release 20th May via Hoo Ha Records. The record was written by Jackson alongside guitarist and producer Bernard Butler (Suede, The Tears) at West Heath Studios in London. These ten songs were conceived as cinematic starting points, movie titles with lyrical story-boards. With ‘British Road Movies’ Jackson paints scenes and tells stories, paying homage to the colour, weather and architecture seen from every car windscreen.

It’s been a long time since Kate Jackson took to the stage with the Long Blondes at their final show in Los Angeles. Following the band’s split in 2008, Jackson moved to Rome and became a painter, specialising in architectural paintings. Her mornings were spent walking the city, tracking up mileage, tracing old to new. In the afternoons she developed and refined her painting technique using acrylic, tape and board. This all sounds idyllic but Jackson slowly realised that her work was primarily about the British landscape. In 2014 she left Rome and returned to her home town of Bury St Edmunds.

Back in Suffolk, the vocalist continued to build her artistic career. But after seeing Nick Cave’s 20,000 Days on Earth docufilm, the spark was reignited; she knew she wanted to go back to music, but also that the music she had made and the painting she was now creating were not mutually exclusive, but born of the same thematic concerns.

Each new song was conceived as a movie title. “The road, much written about in American popular song, and an American cinematic staple, is often ignored in British culture,” Jackson explains. “As an island our roads lead somewhere far too quickly to hold adventure. We are not the land of Jack Kerouac but of Antiques Road Trip. But who is to say our roads can’t be cinematic?” She cites filmmaker Chris Petit’s ‘Radio On’ film from 1979, Patrick Keiller’s Robinson trilogy and the writing of Will Self and Iain Sinclair as touch points.

Writing with Butler came very naturally, “We initially bonded over a shared love of Bowie, The Fall, Neil Young and Brian Eno, and quickly found that songwriting flowed freely between us”.

In July and August 2015, Jackson was artist in residence at Smiths Row contemporary art gallery in Bury St Edmunds, where she started a new series of paintings entitled, ‘British Road Movies’. Always envisioned as a multimedia project, these paintings became a visual pairing to the new songs, with a number of them lending themselves to the artwork for the album and subsequent singles. An exhibition will be held in London around the release of the album.