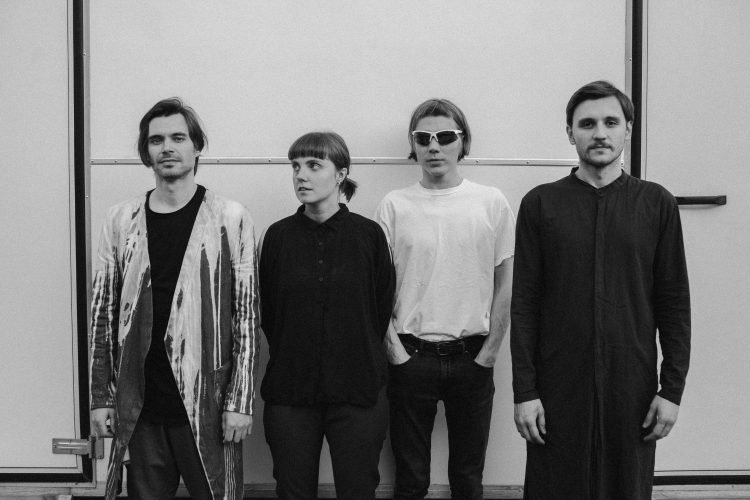 “I put all my energy and life force into this record,” says Sasha Piankov of Gnoomes, the Russian outfit who blend a potent mix of psychedelic stargaze kraut techno kosmiche pop.

When Gnoomes released their killer 2017 LP Tschak!, it came after a turbulent period that saw Piankov temporarily imprisoned for smoking cannabis and also narrowly avoiding mandatory service in the army. After locking themselves in an old soviet radio station with analogue synths to make a record that pulsed with frenetic electronic possibilities, the period that followed after was more settled. Piankov married Masha Piankova, who also joined the band, and guitarist Dmitriy Konyushevich had a child, whilst drummer Pavel Fedoseev began an ambitious solo electronic project, KIKOK.

Whilst having a bit of time off to do such things, the rumble of their live performances still cascaded around their ears and heads. The success of their tours in the UK and Europe had subconsciously created a template and tone for where the band would go next; to capture that surging drive and throbbing assault of their pulverising live shows. “We decided to make this record more live and less electronic,” Sasha says. “We were thinking about how to make it sound more dynamic.”

Masha’s introduction was a key one, with her replacing Sasha on synth bass whilst he moved over to second guitar to add a fuller and more impactful sonic crunch. “We all love that she’s come into the band and expanded our sonic universe,” Sasha says. Masha knew the songs inside-out from touring with the band and seeing every show but it had never dawned on her before to make music. “I’m having the best time of my life making music,” she says. “It’s such a pleasure, I don’t know why I wasn’t doing it before.” This fresh energy coming from a conventionally inexperienced person can be heard echoing throughout the resulting record.

With the completion of this album, it also wraps up a trio of records all connected via punctuation – Ngan! Tschak! Mu! – but with one each distinct in its own tone and sense of evolution. From Bowie to the Cure to Moderat, musical history is peppered with great musical trilogies and now Gnoomes’ Exclamation Mark Trilogy can be added to that.